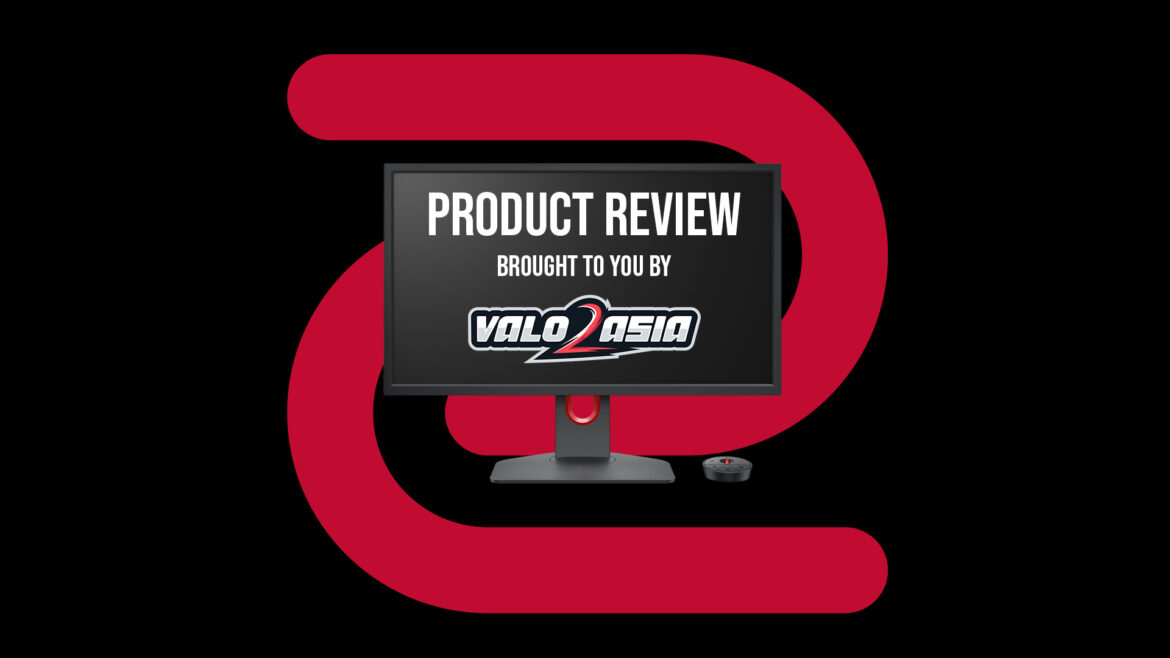 VALO2ASIA has partnered with BenQ ZOWIE for an in-depth look at their flagship gaming monitor, the ZOWIE XL2546K. It’s probably the best gaming monitor you will ever play on, period.

The ZOWIE XL2546K is the successor to the XL2546 gaming monitor, the 24.5” version of their 240Hz model, and probably the most popular esports monitor ever created. Some of the biggest tournaments across the World of esports use it in their events, and it’s understandable why.

The XL2546K offers the new DyAc+ technology and a native 240hz refresh rate. While that’s nothing new in terms of the hardware, it’s the changes they’ve made to the design and ergonomics of the monitor that set this model apart. You’ll see soon what we mean, but first, let’s get some of the technical stuff out of the way.

Right out of the box, the monitor comes with all the necessary accessories. Included are the monitor shields, the all-important S-switch, the product manual, a display port cable, a dust cover, and of course a power cord. What you see is what you get with ZOWIE, and I like they continued the “no-frills” approach.

The monitor features a 24.5” display, with a max resolution of 1920 by 1080, making it FULL HD at 1080p. As I stated earlier, not much has changed in terms of the hardware inside, this monitor still uses a TN panel, so if you’re looking for the latest and greatest IPS panels or 360Hz refresh rates, this isn’t the monitor for you.

Below is a detailed summary of the technical specifications as presented by BenQ ZOWIE.

A fundamental difference between the previous model, the XL2546, is the impressive 0.5ms response time, and until now, that’s the fastest response time you’ll see on a gaming monitor. After using it for a few months, I definitely noticed something that was smoother about my gameplay, and with all other settings equal, I conclude that the .5ms difference is noticeable, but just barely.

Looking at the image above, you’ll notice obvious differences like the cable management, the stand, base as well as the exclusion of additional ports like USB 2.0 and a headphone jack. We’ll get into these design features below.

Now it’s time to get to the form and function, an area we’ll spend quite a bit of time on since this is the key difference between the two monitors. In terms of the design, it’s no secret that ZOWIE is about form and function over aesthetics. This gaming monitor is basically about comfort, there are no speakers or RGB lights. When we first heard about this model, we were excited about things like a zero-bezel display or even some subtle backlighting, but I guess we should’ve expected that wouldn’t be the case.

Ultimately, the changes ZOWIE has made stem from tons of experience with professional-level players, which is why they tout this as the “best esports monitor”. This actually isn’t designed for a casual gamer, it’s truly made for professional players and those aspiring to be.

As we go through the list of these design changes, you will notice how a lot of them may not even appeal to you – the base, for example, matters for those that play with weird setups.

As you can see, the new design is more compact and occupies less desk real estate. While this is useful in quickly distinguishing between the two models, it also serves a purpose for your own uniqueness. As you can see from this illustration, the ability to play with more room for your mouse, keyboard and mouse pad allows for freedom of choice in how tight you want your setup. This isn’t something that affects me personally, but for those of you who like to play with a slanted keyboard, or with the monitor really up close, this is a very useful change.

A cool thing about the ZOWIE monitors has always been the addition of a headphone stand. I personally own the XL2746S (27″ version), and it continually bothers me that the headphones mounted on the side block the privacy shields. You can’t hang your headphones without keeping the privacy shield closed unless of course, you don’t add them on in the first place. The new ZOWIE XL2546K fixes this by adding the headphone stand on the back, but of course, the con of this is you now have to reach out towards the back of the monitor to get your headphones unhooked. Ultimately, it’s a small but important change, and you feel the difference after continuous use.

The ‘privacy’ shields are another standard feature of ZOWIE esports monitors. In my experience, many people don’t even use these and ironically, find them distracting. Personally, I use them, and it’s when I get really serious into the game that I feel it sort of helps me focus, maybe it’s just a mindset? With the K version, ZOWIE has opted for a more user-friendly installation. They’ve done away with the need for a screwdriver with the easy clip-on wings. However, I do feel the ‘clip-on’ feature is a bit flimsy, and if you’re not careful, the plastic can break, and then you’ll be left with a wing that won’t even clip on anymore.

The handy S-Switch, a USB device that plugs into the monitor, has also been updated. I like the subtle changes they’ve made without the red numbering, and it’s another way to determine which model of the XL2546 you have. However, I do miss the regressed S-switch holder in the XL2546. This was nice because it allowed the S-Switch to sit comfortably in the base. However, it’s understandable that they got rid of it though, considering the smaller base.

According to ZOWIE, the monitor now has an increased angle for swivel and rotation.  Again, this won’t affect a majority of the player base, but for professionals who play extremely long hours in all sorts of weird positions and setups, the 3-degree angle makes a huge difference, so I’ve heard.

The inputs include three HDMI 2.0 ports, a single Display Port, with a headphone jack output. The main difference here is the removal of DVI support, but that’s an interface of the past, anyway. ZOWIE has also gotten rid of the additional USB ports on the side, I guess no one really used them anyway. I know I didn’t.

Another great feature of the new ZOWIE monitor presents itself in the revamped OSD, or On-screen Display. While the most obvious changes are on the outside, ZOWIE has made a few cool improvements on the UI/UX of the OSD as well as a brand new feature called XL Settings to Share™, more on that below. The OSD is a lot easier to navigate, and together with the S-Switch, it makes for quick setting changes and it’s just a lot more intuitive. To give an example, finding the settings for commonly changed presets like Brightness and Contrast are just a few steps away, instead of being buried beneath multiple sub-menus.

With XL Settings to Share™, you can now export the various monitor settings under different profiles. Simply download the XL Settings to Share desktop app from ZOWIE, and export your favorite settings. You can share the configuration file on a USB or via a cloud-based storage solution of your choice, and have the precise settings you’re comfortable with anywhere you use a ZOWIE XL2546K. To be honest, I struggle to find a use for this for most gamers, even professionals. The reality is, if you’re a professional attending a top-tier tournament, they won’t allow you to bring any USB devices or download anything from a cloud storage solution anyway. Although, in the rare case that they do, I think this would save you a lot of time.

Either way, you can watch the official ZOWIE video below to learn more about this unique feature:

For those familiar with ZOWIE, the black equalizer is something you’ve come to expect. Similar features exist in other brands, and it works to enhance blacks without compromising performance. The difference with the black equalizer on is less impactful in a game like VALORANT, however, but if you play a variety of games that have dark spots or generally feature darker maps or shading, the black equalizer is going to make a big difference. I didn’t notice much of a difference between the XL2546 and the new K-series, so I don’t feel there is a need to elaborate on this. The main takeaway is that Black eQualizer works, and you will notice a difference if you’re switching from any other brand of monitor, even other 240Hz models.

DyAc+, or better known as Dynamic Accuracy Control, is another key feature of ZOWIE’s esports monitors.

According to ZOWIE,  DyAc+ is a technology designed to reduce motion blur seen in LCD panels. It reduces vigorous screen shaking in-game and can help improve recoil control. Perhaps the difference is minimal and varies from person to person, but the difference in competition is often that one percent.

Couple DyAc with the 240Hz refresh rate, as well as the finely optimized 0.5ms response time, and you start to realize the minor details that set this monitor apart.

One thing to consider is that this monitor, and almost all the monitors in ZOWIE’s product line, are an alternative choice. The reality is, gaming monitors have almost all reached a level playing field. Every major manufacturer has a 240Hz version, and some even feature 360Hz models. ZOWIE is hyper-focused on the professional player – so it doesn’t surprise me that they feature some unique things and forgo others, such as backlighting, IPS panels, RGB lighting, and speakers. Even if you’re not ready for 240Hz, or the hefty price tag that brings with it, ZOWIE offers alternative models such as the XL2411K, which is almost identical to this monitor but features 144Hz instead of 240Hz. That being said, if you’re concerned about price, then you’re probably not ready to invest in a monitor like this. Ultimately, that is what these monitors are, an “investment”.

So, how do we really feel about this gaming monitor? You know, it’s really easy to pinpoint negatives like the hefty price tag, so I won’t dwell on this part. Yes, this monitor retails at SGD $799 (USD $499 in the US market) and that is going to be a huge factor for a lot of people, but this is an obvious setback.

What I would like to see in the future is more attention to the multiple use cases. I do think there is a space for ZOWIE to make a hybrid monitor of some sort – today’s professional player requires a level of commitment in content creation too, and it would be amazing to switch between two profiles, one for creation, and one for serious gaming, for example. Maybe this isn’t something the XL series can achieve, because after all, a TN panel is required to achieve the performance that this monitor boasts. For what this monitor is specifically designed for, it does an astounding job.

Overall, the design changes ZOWIE has implemented are clearly well thought out, while on the surface they seem subtle, the more you interact with your new monitor the more you appreciate all the attention to detail – especially with things like the base and the headphone stand.

Learn More About The ZOWIE XL2546K