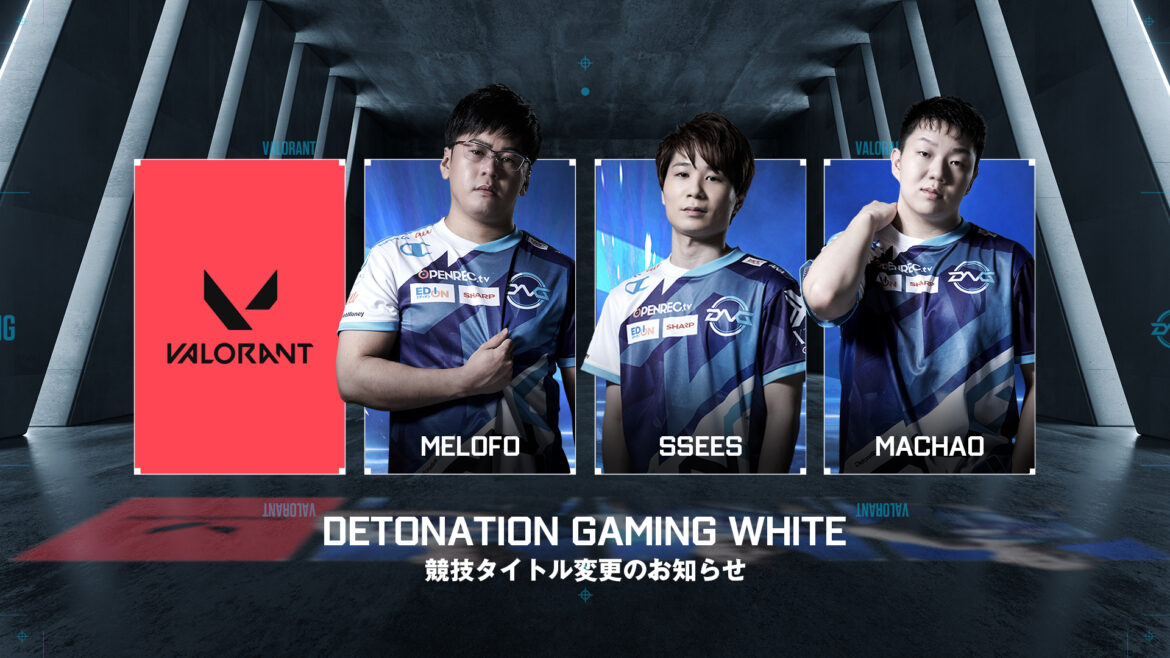 Japanese org DetonatioN Gaming have swapped 3/4 members of their PUBG roster, considered neck-and-neck with ENTER FORCE.36 for the best in Japan, to VALORANT.

Joining DetonatioN VALORANT will be Hirotaka “Melofo” Okazaki, Tomonori “SSeeS” Okimura, and Yu “Machao” Masai. The fourth member of the team, Yusuke “Gokuri” Manabe, has retired instead of switching games. Playing under the name DetonatioN Gaming White, the roster found tremendous success in PUBG. They’ll be keeping that name in their new game.

DetonatioN previously had a VALORANT roster, featuring some top players like Lee “Hate” Ye-hun and Tenta “ten” Asai, but dropped their team after an unsuccessful VCT Stage 2.

Korean and Chinese rosters are much better than Japanese in PUBG, but DetonatioN White made some real noise internationally. They attended the PUBG Global Invitational.S early this year, placing 28th and ahead of E36. Despite a slow year, they’ve found their form again over the last few months.

Both they and E36 qualified to PCS5 Asia, the most recent big and international event in PUBG. They did much better than E36, placing 11th and keeping pace with some of the best rosters in the world. With Japan only receiving one guaranteed slot at the PUBG Global Championship, they narrowly lost out to E36 based on circuit points. With their PUBG year over, they’ve made the decision to swap to a more promising game.

How well could they do?

The biggest PUBG experiment in VALORANT was 100 Thieves early on, who fielded a roster featuring four former North American PUBG pros. That roster didn’t do very well together, but several players made names for themselves. One, Diondre “YaBoiDre” Bond, still plays, starring for Luminosity Gaming in North America.

DetonatioN’s performance will depend a lot on who they bring in to finalize the roster. But as one of Japan’s biggest organizations, they can bring in some very good talent. As for the players who’ve swapped, SSeeS was a great long-range fragger, while Machao was the team’s In-Game Leader. Whether or not they’ll keep those roles in their new game remains to be seen.

DetonatioN’s roster is yet another one bringing potential and excitement into the Japanese VALORANT scene. Along with new rosters from the likes of BLUE BEES, Sengoku Gaming, and DeToNator, they’ll be trying to challenge the established top in the scene. These last few months of 2021, and the start of the VALORANT Champions Tour in 2022, will be incredibly interesting to watch develop in Japan.