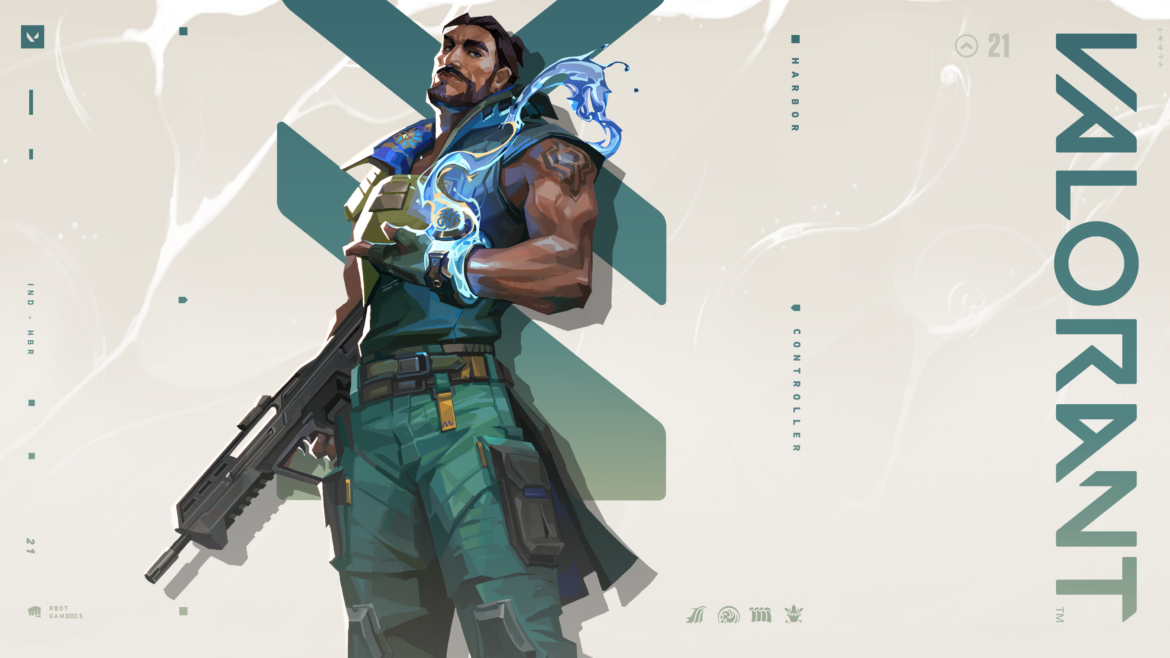 Riot Games has announced Harbor, the newest agent from India that has the ability to manipulate water. It is the fifth controller agent that was released in the VALORANT after Astra which was released in March 2021.

Harbor has the potential to become an impactful agent due to his ability to summon a wall of water that can be controlled with the crosshair. He can also create a water orb that not only blocks vision but also absorbs bullets that can be useful for planting spikes or retaking sites.

ALSO READ: How to Create Your Own VALORANT Crosshair – Explained

Here is everything you need to know about Harbor and our opinion about him:

Cascade is the first basic skill of Harbor that creates a wave of water that takes the shape of a large rectangle with which the wave will move forward in the direction cast including passing through terrain.

After maximum travel duration or upon re-activation, the wave will stop moving and remain in place for a short duration. Any agent who came into contact with the wave at any point briefly slowed.

The skill is useful for covering or blocking sight, especially for the operator. However, the skill does not block bullets and only has one charge.

Cove is the second basic skill that equips a sphere of shielding water. When casting, it throws the sphere forward until it comes into contact with a horizontal surface. Harbor can control the length of the Cove throw. Upon impact, the sphere will wind up briefly before creating a sphere of water encased in a shield.

While the shield remains active, it will prevent any gunfire from passing through but abilities can still pass through the shield. The shield will last until maximum duration or until it takes enough damage. Cove can block around 13 bullets from Vandal and Phantom.

Despite being able to block bullets, abilities such as Shock Bolt from Sova or Snake Bite from Viper can still pass through Cove so you need to still be aware when using the abilities.

High Tide is the signature ability of Harbor that sends a sphere forward that can pierce through terrain. The direction and altitude of the sphere can be controlled by holding fire and moving your crosshair in the direction you want it to go.

Once the sphere reaches maximum duration or alt-fire stops, a wall of water will start to spread across the length of the path. Similar to Cove, any agent that crosses the wall will be briefly slowed. High Tide wall will last for 15 seconds and can be used again after a 40-second cooldown.

Reckoning is Harbor’s ultimate ability that creates a large, circular geyser pool at the target location that slowly moves forward over the duration. The pool will search for any enemies within and if detected a geyser strike will erupt and concuss any agents caught within the strikes.

The abilities are useful for clearing out sites and they can reveal their locations even if they are hiding behind cover. Despite that, allied agents or Harbor can also get the concussed effect if they are caught off the geyser strikes.

ALSO READ: Why Velocity Gaming is bullish on South Asian VALORANT, and betting its future for another two years

Harbor has many abilities that can block vision even at a narrow-angle so it is useful in many scenarios. Cove is very useful as a defense tool to protect yourself and allies especially for planting or retaking the site.

The problem with Harbor is he does not have abilities that can stop or force opponent movement, especially on the defense side. With that, he can not be the only controller agent in the team and it needs other controllers such as Brimstone or Viper as said by ANGE1 (former IGL Fun Plus Phoenix) and Dani (former Sentinels analyst)