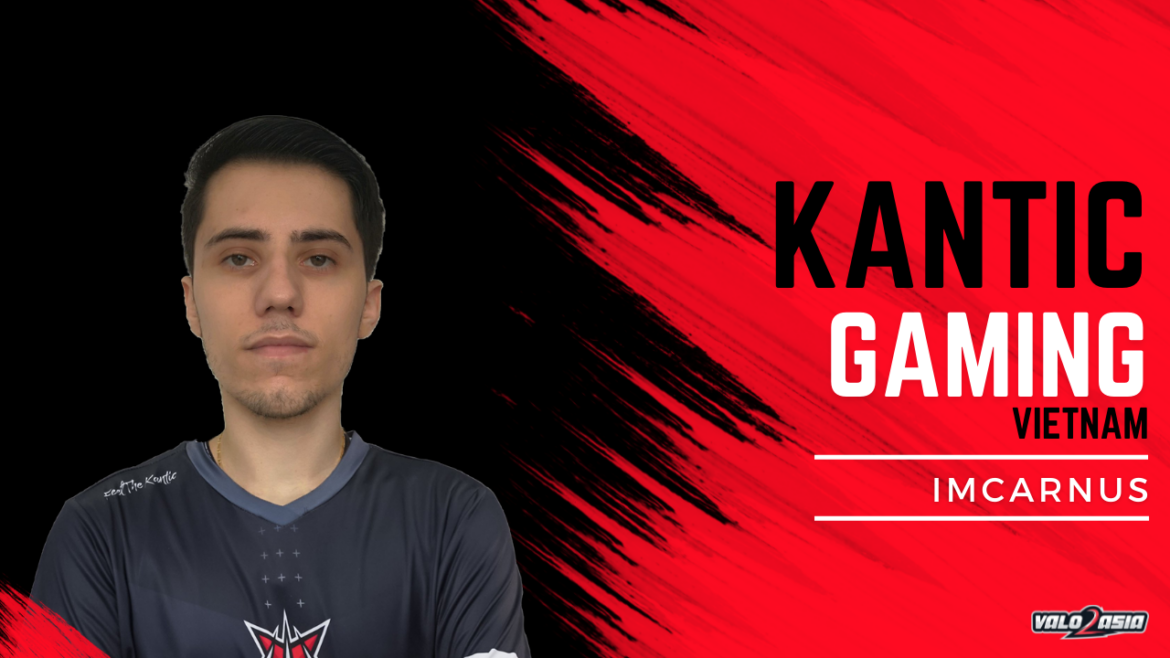 Elian “Imcarnus” Lopez of Kantic Gaming recounts his path from the start of his career with CERBERUS Esports to establishing Kantic Gaming, a unique team composition of international players presently residing in Vietnam, and by far the only English-speaking team in the upper-echelon of Vietnam VALORANT.

Despite residing in Thailand, the French player spent most of his esports career in the Vietnamese scene. Imcarnus made his professional debut in VALORANT with his teammates from CS:GO on the first roster iteration of CERBERUS Esports. However, he represented the team for only a brief period due to COVID-19 limitations that prevented him from traveling to Vietnam, among other reasons.

As the language barrier limited him from competing in an all-Vietnam side, he still expressed his desire to stay in the scene by forming Kantic Gaming. A highly unique composition, with three Frenchmen, one German, and two Vietnamese players all aboard the same ship, establishing them as the only Vietnam-based team with an international lineup so far.

With VALO2ASIA, Imcarnus weighs in on a variety of topics, from his beginnings as a player, his struggle as the only non-Vietnamese player on the team, and the current situation of a language barrier in Southeast Asian VALORANT.

Answers have been edited for clarity and grammar.

VALO2ASIA: Hi Elian! First and foremost, we would want you to introduce yourself to those who are still unfamiliar with you.

Imcarnus: Hello everyone! My name is Elian, aka “Imcarnus”. I am 23 years old, and I am a French professional esports player living in Thailand. I was formerly a professional on CS:GO and now am in VALORANT. I used to play for Team SHIFT and CERBERUS Esports, and as of now, I am currently the in-game leader of Kantic Gaming.

VALO2ASIA: How did you end up living in Thailand? Tell us more about it.

Imcarnus: Well, it’s a classic story: My family moved to Thailand for business-related stuff in 2014, and I just joined them to live here too.

VALO2ASIA: Are you fluent in Thai right now?

Imcarnus: I can speak it pretty well indeed as of now; I still need to get better at writing though!

VALO2ASIA: And then fast forward, how did you end up playing for Vietnam teams? And how’s your proficiency in the Vietnamese language?

Imcarnus: Well, actually I did not choose Vietnam; it’s Vietnam who chose me, haha! As a French player in Asia, it was always a struggle for me to join a team due to the language barrier, which is why I established international projects. I got myself in the Vietnamese scene in early 2020 after receiving a call from a player named ‘tozz’ who was then playing for SHIFT on CS, and they wanted to try something new with a European in-game leader, switching the communication to English.  I immediately agreed, seeing it as a chance to finally establish myself in tier 1 Asia not just as a player but also as an in-game leader and captain, along with all the responsibilities it entails. As of now, I still don’t speak Vietnamese; all the teams I have played for switched to English communication for my lead.

VALO2ASIA: From your perspective, how big is the Vietnamese VALORANT scene as someone who chooses to stay in the scene over your current residing country?

Imcarnus: Well, VALORANT has surged in Vietnam. It should come as no surprise to anybody that the number of Southeast Asian players for 5v5 tactical shooter games is exceptionally high. Vietnam is no exception. Locally, the scene is thriving, and it continues to grow. I see potential in the scene, as it is new for many Vietnamese players here, to grow in professionalism and show themselves to the rest of the world. However, I’m not ruling out the possibility of one day playing in the Thai scene after my Vietnamese journey; who knows!

VALO2ASIA: How did you end up playing for CERBERUS Esports in the first place?

Imcarnus: When we were on SHIFT in CS:GO, we were unable to agree on a new contract term with the organization, and contact was made with Cerberus Esports real quick as at that time we were considered the #1 CS:GO team in Vietnam. The discussion went smoothly, and Cerberus Esports agreed to transfer us to their organization on the condition that we move over VALORANT once the game is launched. Only three of us were transferred (Kishi, huyhart, and myself). That’s how the first version of Cerberus VALORANT was formed.

VALO2ASIA: And then how was the journey there in short?

Imcarnus: The journey was complicated, to say the least. I only played for them for three months. The main reason was the fact that we were amid a covid pandemic, and there was no way for me whatsoever to join the boys at Cerberus’ gaming office in Vietnam. I was the only international player on the squad; the others were all Vietnamese, including the player, coach, and manager. I was the only one separated from the rest; my integration was poor, and no one really helped with it. Unfortunately, as the captain and in-game leader, the chemistry deteriorated, and I began to hear certain players express a desire to stop communicating in English and other things.

Additionally, it was Cerberus Esports’ first time handling a 5v5 tactical shooter team, and some decisions in upper management and coaching regarding the roster and players were not the right one for us, leading us to trouble and inconsistency. Fortunately for them, Cerberus learned the lesson from this first version, and they also grew up as an org with this misadventure. As for me, it just reassures me in my convictions that the base of a team starts from the chemistry between everyone in a roster.

ALSO READ: rite2ace on his one-year extension with Velocity Gaming: “In the last 1 year, we have literally created a family”

VALO2ASIA: Should the language barrier be a worrying factor for Southeast Asian teams to grow? Or does it not have much of an impact due to the regional system forced by Riot Games?

Imcarnus: I believe it’s a different mentality and partly depends on the format. VALORANT in Europe is full of international rosters. However, in Asia, the region rules indeed reinforce the one national team, and it’s not going in the right direction, in my opinion. Recently, Paper Rex has shown that having an international roster is a key to success if you find the right player for each role. EGO from Vietnam recently also picked up a Thai player, which helped them qualify for SEA challengers. The rules are not as strict as they appear; you only need three players from the qualifier’s nationality to participate, opening the door for international projects. However, there is not that much for now, and it is unfortunate; I think it could unlock more potential for SEA to give a better fight to other regions or even win.

We have some excellent players in the region; it would be fantastic to see more players from various nations unite together and possibly reign better if they make the right decision for the roles etc. Of course, the English language is eventually blocking this from happening, but many people I meet speak pretty ok English, to be fair. That’s again my own opinion on the topic.

VALO2ASIA: As you said, you built Kantic Gaming in the next chapter of your journey. We noticed that Kantic Gaming have a completely unique composition, with three French players, one German, and one from Vietnam. How did it come together in the first place and what were some challenges?

Imcarnus: This is a long topic. After the Cerberus journey, I had several offers, and I declined all of them because I wanted to try a new idea that I did not see that much in Asia: An academy team.

I found Kantic Gaming with a French friend who is helping us on the founding side. Our goal was to establish a brand, a name, and to recruit young unknown players with little to no experience to help them improve and eventually reach the top level with me as a captain. People were calling me crazy to have declined some really good team offers to do this project, but hey, I am a competitor, and I like new challenges!

So I did some trials, scouted the area for a month, and it is funny because the players I have picked bring me back to Vietnam once again. Indeed the players in Kantic Gaming have a 50/50 split of Vietnamese and non-Vietnamese players (French, German, etc). They lacked any experience; I assessed their communication and ability, and there was something to be done with them.

We went from losing to a Diamond team in November 2020 to qualifying for every significant event in Vietnam and sometimes beyond the country in the span of nine months without receiving any compensation, but solely with passion and hard work.

As of now, we are still playing without salaries; we are playing with our hearts because the boys I took in Kantic are hungry and determined to give the best version of themselves. They have no ego. They listen, improve, and step by step, we grind the leaderboard. I am very proud of this project and what I have achieved as a captain on this team, but we still have a long road ahead of us, and we will continue to work hard for it.

VALO2ASIA: That’s interesting that you can find three Frenchmen and one German for the team!

Imcarnus: That was actually surprising for me too to learn that; it’s really not intended, haha.

VALO2ASIA: As this article will be up for years ahead, what’s next for ‘Imcarnus’ that you want to see?

Imcarnus: On a personal note, I will compete until I feel no longer at the capable level for any team. Obviously, the next step is to become a coach; I like being behind the players and acting as a father figure both on the game with the tactics and off the field with the chemistry. For sure, I am confident that I will stay in esports for a really long time, as long as possible.