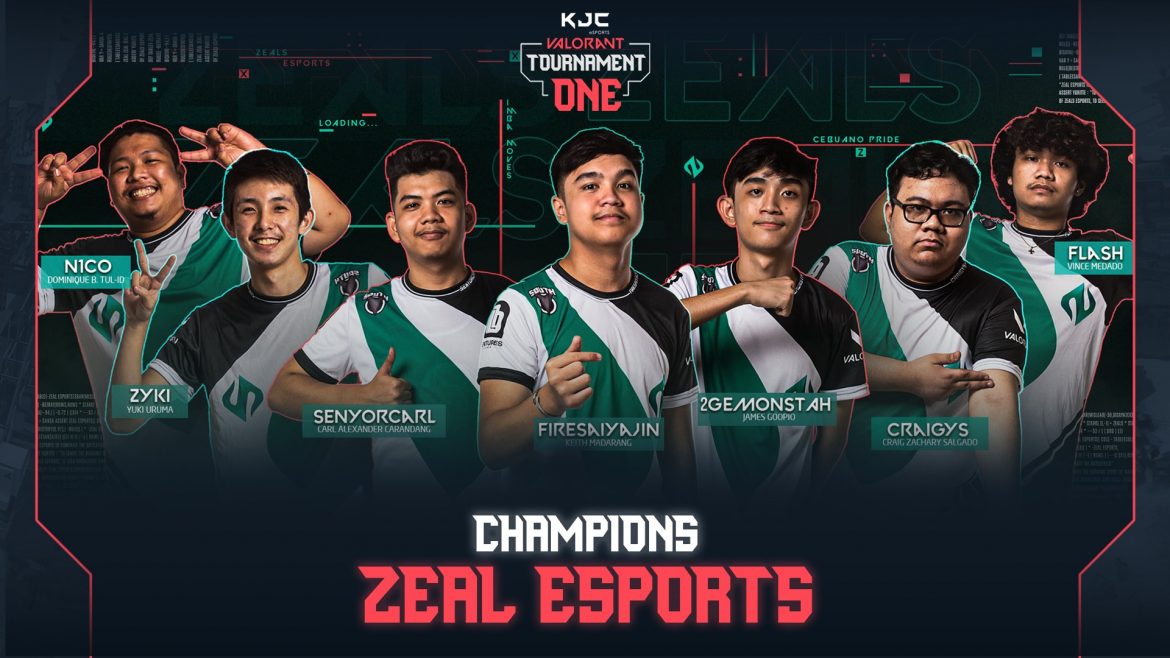 Zeal Esports upset Paper Rex to seal the deal at the KJC eSports Tournament: One

After being crowned VCT 2021 Philippines Stage 2 Challengers 3 champions, the former 6045pirates squad added another accolade to their resume.

Zeal Esports has been crowned the KJC eSports Tournament: One champion following a 3-1 victory against Singaporean Paper Rex in the tournament’s title decider (Ascent 14-12, Bind 13-5, Icebox 9-13, Split 14-12). The Cebuano side has also secured the HK$5,000 (~US$644) grand prize and established itself as the new contender in the upper-echelons of Southeast Asian VALORANT.

Paper Rex came to the invitational tournament as one of the favorites, while Zeal Esports proved their worthiness after a dominant showing in the Philippines qualifier, beating the likes of Oasis Gaming, SV Empire, and South Built Esports.

Both teams breezed through the playoffs with Paper Rex defeating Griffin Esports 13-2 in the quarterfinals, and Zeal Esports shutting down Todak (MY) 13-7. The Singaporean and Filipino sides then overtook XcN Gaming and EGO, respectively, en route to the grand final.

Carl “senyocarL” Carandang maintained his dominant form into the grand final, posting a 238 Average Combat Score (AVG) over the series’ four maps. While Keith “FIRESYJN” Madarang had excellent individual performances and led the scoring, senyocarL’s impact during critical times, particularly on Ascent and Split, was the only and most obvious justification for his nomination.

The title decider commenced on Zeal’s map pick of Ascent, a selection that has favored the Cebuano side historically. Paper Rex came into the grand final with their coach, Alexandre “alecks” Salle as a stand-in.

Taking the pistol round gave Zeal an early edge and a 5-1 lead, but they were unable to convert the lead in the latter rounds of the first half, as Paper Rex closed the gap to a 7-5 scoreline. Paper Rex appeared certain to continue their upward trend, especially after winning the pistol round, but senyocarL and co. refused to give up their map pick and pieced together a streak of their own, except for the final 13th round, which Paper Rex took to ensure the game continued to overtime. Zeal did not allow their opponent to work on things and sealed the map, 14-12.

Zeal Esports came out strong once again on Bind, controlling the whole first half and sprinting to the finish line to take the second map, 13-5.

Icebox, a map with a 70% win rate for both sides, proved to be the same in this encounter. Both teams looked strong in the first half, reaching a 6-6 tie. However, the next half was a one-sided affair, as Paper Rex grabbed the map with a strong offense, with Jason “f0rsakeN” Susanto and Khalish “d4v41” Rusyaidee serving as the crucial elements in the PRX’s triumph, 13-9.

The fourth map featured another tight battle between two teams that had never met before. Both teams had brief success early on by exchanging rounds back-to-back until they swapped sides. At first, Zeal Esports, who won the first two rounds, seemed to be very sure about winning the next four rounds and lifting the trophy. However, Paper Rex responded on the defensive side by winning six straight rounds until being flipped back by Zeal with their three rounds. Paper Rex won the 24th round, relegating the fourth map to overtime. As was the case with the previous map, Zeal looked strong in the subsequent two overtime rounds, winning the map 14-12 and the KJC eSports Tournament: One trophy.