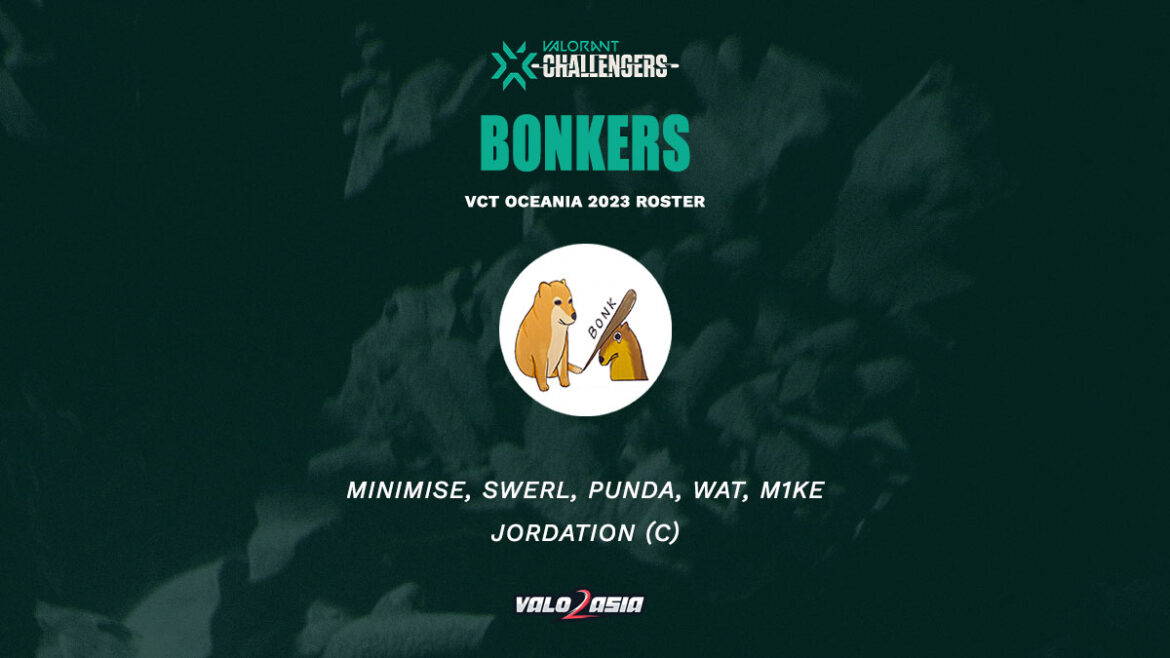 With the squad now complete and Minimise taking the reins of leadership, the newly-revamped Bonkers are now ready for their upcoming VCT Oceania Stage 1 Challengers campaign next month.

AUSTRALIA – Bonkers have announced their updated roster for VCT Oceania 2023, adding former Catgirls member Ali “Swerl” Kobraee and former REIGN duelist Lachlan “punda” Bamford to complete the starting five. These two players will be taking the spots left behind by the departures of Matthew “MaiShiu” Wu and Raymond “xsus” Wang.

Heading this new-look Bonkers is none other than Jackson “Minimise” White, who notably captained the team to a first-place finish in VALORANT Oceania Tour Stage 1 Challengers to take home the lion’s share of the AU$25,000 prize pool and qualify for VCT APAC Stage 1 Challengers.

Since his departure in May, Minimise has had brief stints with MY/SG’s Madness Esports and REIGN, competing in the open qualifier of VCT MY/SG Stage 2 Challengers with the former and VALORANT Oceania Tour Championship and LPL 2022 Winter Cup with the latter.

Returning to the organization are Ali “Swerl” Kobraee, Michael “M1kE” Smith, Lewis “WAT” Watson after previously playing for the team in the VOT Championship. The move to retain the latter two and Minimise does not come as a surprise, however, as Bonkers had been spotted playing with the trio in the DreamHack Showdown VALORANT Oceania, helping the squad to a runners-up finish. On the other side of the server, Swerl managed 236.8 ACS across 259 rounds with coach Jordan “Jordation” Frish’s The Who.

Although Lachlan “punda” Bamford has not played under the Bonkers banner before, he will be reuniting with Minimise and M1kE, two of his teammates on REIGN and Iconic, respectively. Outside of his time in the official VCT circuit, the Sova main most recently reached the lower bracket final of the DreamHack Showdown VALORANT Oceania with SOTZ V2 before falling to eventual winners BOBO.

The previous Bonkers roster notably found success in Stage One, with their respectable performance in the VOT Stage 1 Challengers earning them a spot in the APAC stage. However, the Oceania roster shuffle that happened post-Stage One left Bonkers with just two players from the winning lineup, resulting in a less successful campaign in Stage Two, as well as the subsequent VOT Championship.

With their roster now finalized, Bonkers are on the path to finding their footing and putting together a respectable campaign next season. The Australian side will now be awaiting the start of the 2023 VOT Stage 1 Challengers, with the open qualifier set to get started on December 15.

As such, Bonkers are now: